CLASSLESS ACT: BOOGIE WITH A MATCH AND GAS

Recently I was introduced to a great new band called Classless Act and man am I ever grateful for their inaugural outing “Welcome To The Show.” These five guys from LA have carved their own niche and put the roll back into rock and roll.

I caught up with Derek Day, lead singer for Classless Act just after they crossed the border to wrap up their Canadian Leg of the 36-city stadium tour with Motley Crue, Def Leppard, Poison and Joan Jett. “Welcome To The Show” is smoking from start to finish. It just picks you up and slams you around the room. I have the same excitement for this album as I did when I first heard Motley Crue’s Too Fast For Love, Metallica’s “And Justice For All” Guns ‘N’ Roses “Live Like A Suicide” or Queensryche’s debut EP. It is that good. Each song packs a punch and is as full of the same energy as their live show. More on the show later. These guys are fresh, young and going places. After the exposure they’ll get on this tour, it won’t be long before they are a household name. Allow me to introduce you to Derek Day on vocals, Dane Peiper and Griffin Tucker offering a one two punch on guitars. Pounding out the rhythm section are Franco Gravante (who also produced a fair amount of their debut album), bass and Chuck McKissock on drums. 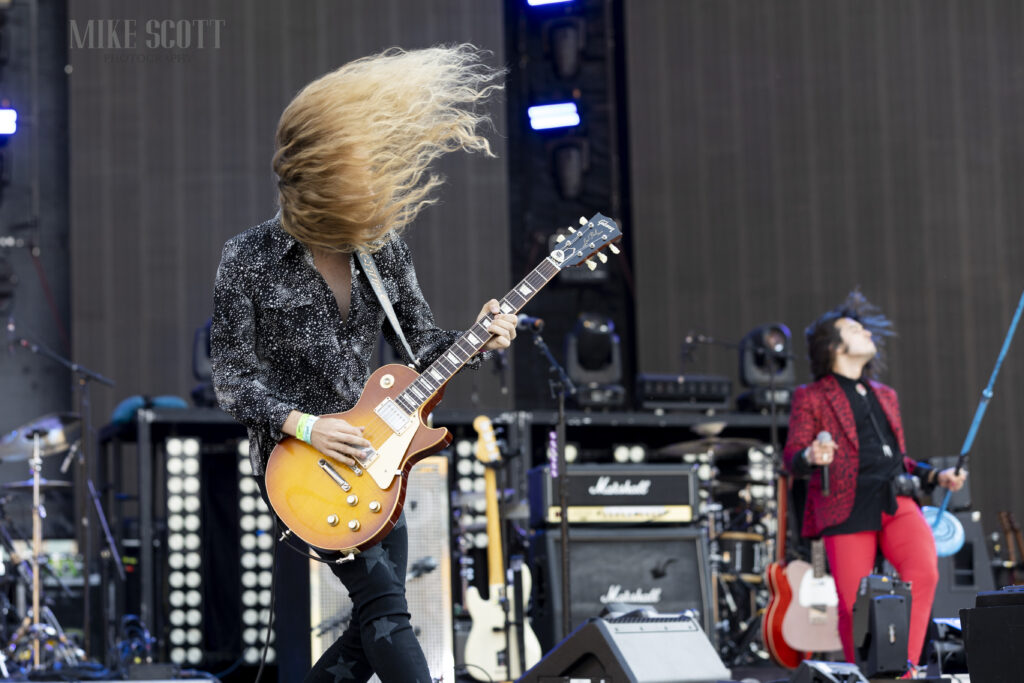 Classless Act is a born from social media. Derek Day, “We’re kind of like this weird modern type of band in the sense that we met through social media. Some of us reached out through Instagram, some through Tik Tok and some through Facebook. We’re following each other. I had been following Dane (guitar) for a while before I even met him in person. We were just fans of each other and eventually we just said, ‘hey you want to be in a band and try to make this happen.’ We started recording with each other and various other people. Once we found the right five it was a real thing. It started back in 2018 but the final form came together in the last couple of years.” Each member had their own thing going on as Day says, “Growing up in LA I was in like 10 different bands did some touring. Franco was from Argentina touring LA with his band when he found us and he realized, ‘I love these guys’ and joined up. Griffin was in Dallas and his own thing going on. But we realized this group has a vibe going on where it can break through enough. It’s really hard to get noticed or even get your foot in the door in rock and roll. We all felt that this combination was worth putting a pause on all other stuff.” 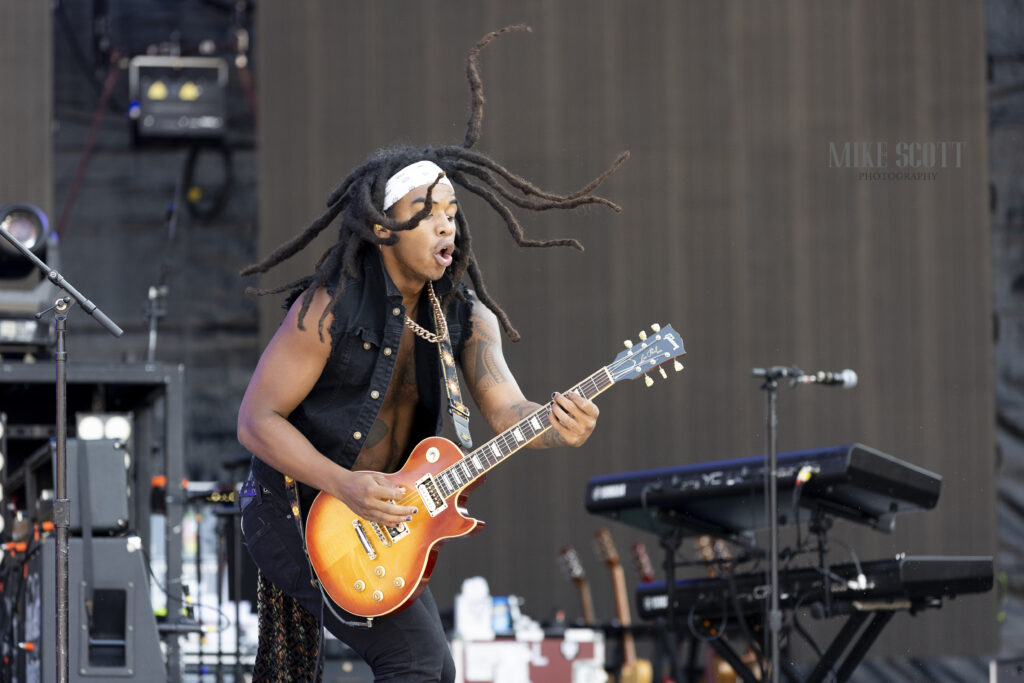 We now jump ahead to 2021 when the lead single “Give It To Me” was dropped ahead of the full album. This song rocks from the opening drum intro through three catchy minutes of piercing vocals and ear worm inducing hooks. Day: “We released it early to show people we like to have fun, kick and jam. We had already recorded a full album by July of 2021. At that point we had just received confirmation that we were going to be on the Stadium Tour so lets just share who we are and let people know we exist, so they know to come and check us out on the tour.” Sitting on an album must be tough to do as Derek adds, “Being musicians we wanted to release the album and thankfully we had smart management who told us to wait until we were on tour to promote it.” 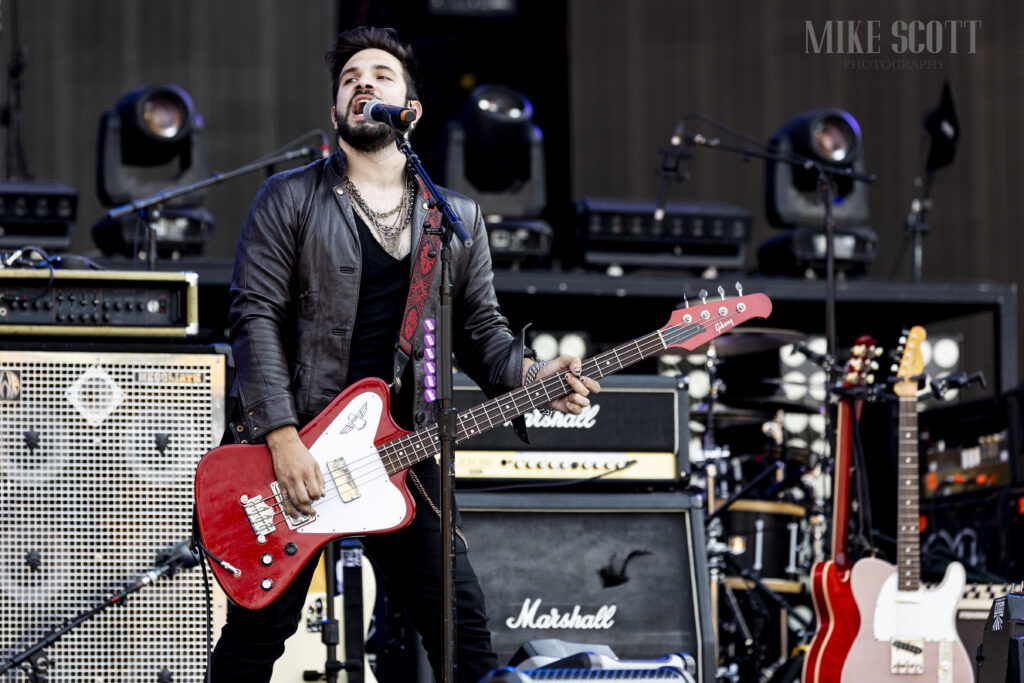 Classless Act’s debut album “Welcome To The Show” has some heavy hitters involved. Motely Crue’s Vince Neil sings on the opening track “Classless Act” and Justin Hawkins from The Darkness lends a voice to “This Is For You.” Guests were not just limited to backing and accompanying vocals. The legendary Bob Rock twisted the dials for “On My Phone” and “Circles.” Day adds, “Bob Rock is truly a living legend in his own right. He’s so nice and he so much to teach and offer without trying to teach and offer. Just by being in his presence we learned so much such as hook placement and how to really structure a song and how to bring out the best in a song and place your parts correctly. It was an honour and a masterclass.” Even though Bob Rock’s handiwork is featured on a couple songs on this outing, Classless Act recorded 7 or 8 songs with him that will possibly be released sometime in the near future. 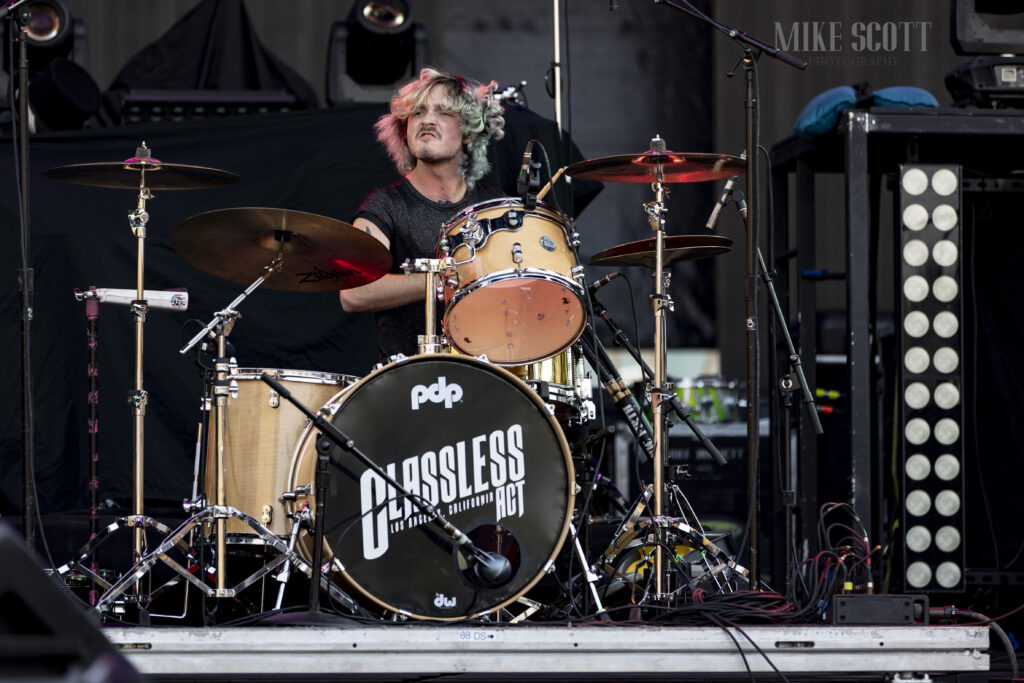 What better way to be introduced to the music world than a coveted opening slot on one of the biggest shows making the rounds this summer. Classless Act performed in 36 stadiums in North America in some of the biggest cities with three stops in Canada, Vancouver, Toronto and Edmonton. How did this spot come about one might ask, “When we were recording the songs with Bob Rock, he suggested we record in Tommy Lee’s studio,” adds Day, “Tommy would come down while we were recording and air drum and rink his espresso and chat casually. He (Lee) is a busy guy, but it was cool to hang out a bit with him.” And how did Vince Neil end up on an almost unknown band’s debut album? “We approached Vince Neil. We were already on tour, and we asked if he’s interested. Obviously, it would help the band so much if you were on the record. It would also help the song as well and make it pop more. It felt like Motley Crue song, and we approached him on a whim.” As I mentioned earlier this album gives me the same feeling I had when I first heard “Too Fast For Love” all those years ago and the opening track kicks it like “Live Wire” and presents the same energy, albeit with a new twist. 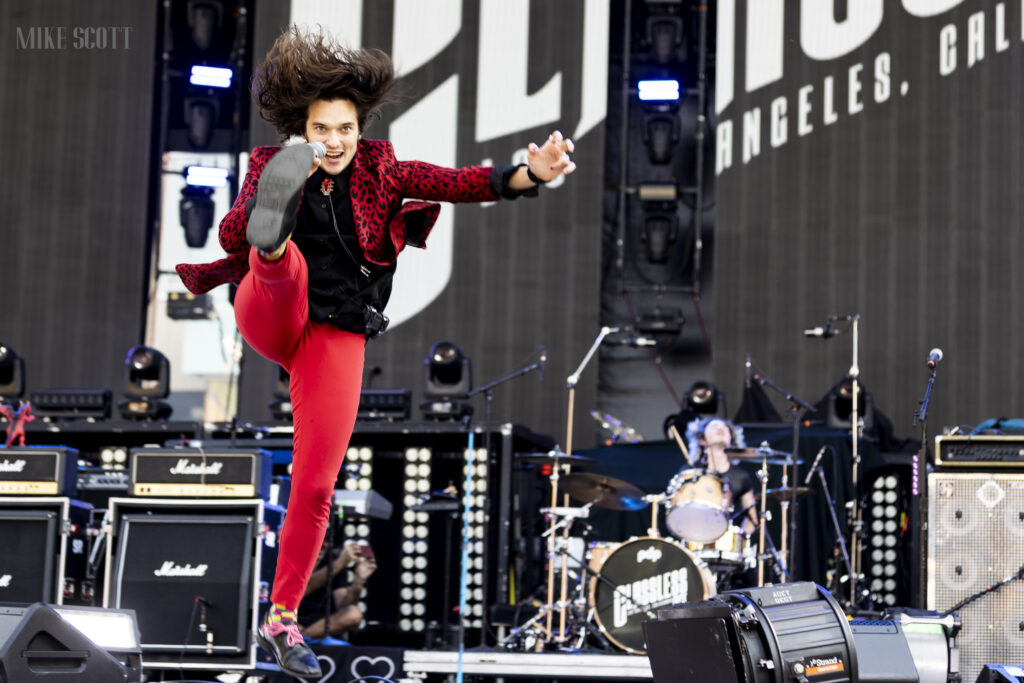 It is rumoured that Tommy Lee said, “These guys are going to shit their pants on this tour.” Day, “Yeah, he said that. It was his way of inducting us to the tour. And no, we did not literally shit our pants. Maybe figuratively after a couple of bad meals. But no, we were so full of excitement for this show.” Having the opening spot on a long concert day, many concert goers are missing out on Classless Act. “We’ve played to a couple thousand to as many as 25,000 people through the door checking us out. And we rock a tight 17 minute and 59 second set giving it our all.” They kick off with “This Is For You”, hit us with “Give It To Me,” “All That We Are” “Haunting Love and end with “Classless Act.” It was a frenetic set from start to finish that had me from the opening beats. The few thousand in attendance at the time they hit the stage would agree. The media room was a buzz with their energy and tight show. 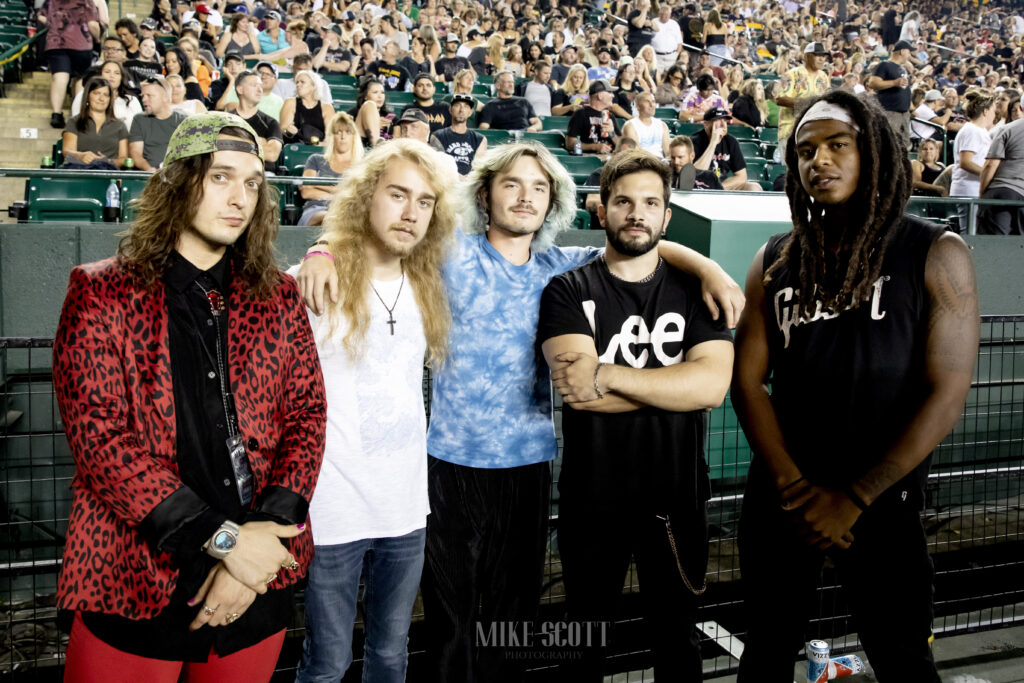 The bottom line for me: Classless Act has something fresh. It may sound familiar, but they’ve put their own unique spin on the familiar. This is rock swagger at it’s finest form. I can’t wait to hear more from them and see a full live show. And for what it’s worth, aside from the opening track, my favourite song on the album is “Circles.” This should be a huge hit. Coming a close third is “Thoughts From A Dying Man.” If you are quick to compare them to hair metal, give the album a serious listen. Appearances can be deceiving.

For more info check them out at Classless Act and stream them wherever you get your music. Watch out for these guys. They are on a fast ride to the top.