SOMETIMES YOU CAN GET EXTRA EXCITED ABOUT A NEW SONG AND BAND POSTING THAT APPEARS ON SLEAZE ROXX. WHEN I SAW CLASSLESS ACT’S VIDEO FOR THE SONG “GIVE IT TO ME” AND HEARD THEY ALREADY HAD THE OPENING SLOT FOR THE UPCOMING ‘THE STADIUM TOUR’ FEATURING DEF LEPPARD AND MÖTLEY CRÜE NEXT YEAR, IT CERTAINLY CAUGHT MY ATTENTION. THE BOMBASTIC IMAGE OF CLASSLESS ACT AND THE INFECTIOUS SINGLE IS SURE HEADED IN THE RIGHT DIRECTION AND MAY SERVE AS PART OF A FUTURE ROCK N’ ROLL COMEBACK. WE CAUGHT UP WITH LEAD GUITARIST GRIFFIN TUCKER WHO ALREADY HAD QUITE A HISTORY OF MUSICAL ACCOMPLISHMENTS POSTED ON HIS YOUTUBE CHANNEL SO WE WERE DOUBLY EXCITED WHEN WE RECOGNIZED HIS MUG IN CLASSLESS ACT’S VIDEO.

Sleaze Roxx: Thanks so much for spending some time with us here at Sleaze Roxx! Your YouTube channel includes many videos of you playing all instruments such as drums, piano, guitars and singing from about age 11?

Griffin Tucker: Yeah. I think the first video was a cover of “Help” by The Beatles. I think I was 10, just about to be 11.

Sleaze Roxx: You’re like a rock n’ roll Justin Bieber. What made you gravitate towards rock all these years while the rest of America moved away from it?

Griffin Tucker: I’ve never understood how anyone could fall out of love with rock ‘n’ roll. It’s so real, so organic. And it’s completely authentic, you know? It makes you feel something. 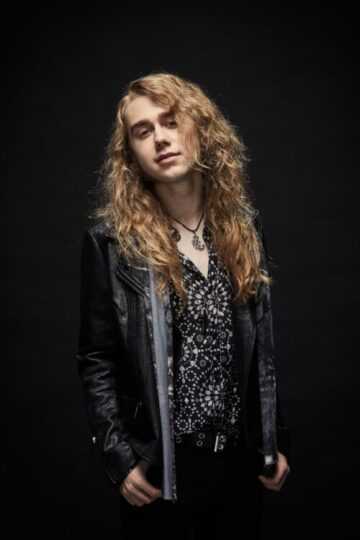 Sleaze Roxx: I couldn’t agree more! Your early videos show you covering artists like The Beatles, KISS and AC/DC. Did you have a main influence while growing up?

Griffin Tucker: Absolutely. The Beatles were and still are my biggest influence. But I definitely love all classic rock. I kinda get on kicks with bands. I was on a kick with KISS, then AC/DC, then Queen, then [Led] Zeppelin. I still listen to The Beatles, Led Zeppelin and Queen literally every day.

Sleaze Roxx: What type of guitars and equipment do you prefer using and playing with?

Griffin Tucker: I have a lot of guitars and I love them all for different reasons because they provide different sounds and feelings depending on the song I’m playing. But lately my “go to” has definitely been my Gibson Les Paul. I also have a Vox AC 30, which I love dearly. I just acquired a Marshall JCM 800 from a good friend. Still gotta pay that one off!

Sleaze Roxx: Well let’s hope you get into some riches with your new band. OK, let’s get to Classless Act. What history of the band can you tell us about?

Griffin Tucker: I can tell you this about Classless Act — I was in the right place at the right time when they were looking for a lead guitar player. I still can’t believe that I get to be in this amazing band. The guys are so great and are extremely talented. We have a great chemistry.

Sleaze Roxx: How did Better Noise Music get involved with it all?

Griffin Tucker: Rick Canny, our band manager, saw something in this band that he thought was special. So, he took the band to Allen Kovac and convinced him to give us a chance. We are so grateful to them both for all the opportunities we have in front of us.

Sleaze Roxx: And how did you end up being in the band?

Griffin Tucker: That’s a real social media 21st century story! Two of my friends were teasing and testing me on whether I actually have perfect pitch. It was captured on video and we posted it to my TikTok and it went viral! Then it showed up on Rick’s feed right when they were looking for a lead guitar player and he was like, “Who’s this guy?” Then he messaged me on Instagram and things happened really fast after that. I did a couple of videos, and the guys liked it. I came out to audition in person and we really hit it off. They offered me a spot in the band the very next day. Pretty cool!

Sleaze Roxx: Yeah, sometimes things just kind of slap together like that and I think it’s great you put yourself out there on social media like that. You’re from Texas while the band is based in Los Angeles. Did you need to make a move there?

Griffin Tucker: Yes, I am currently living out here.

Sleaze Roxx: What is your role in the band? 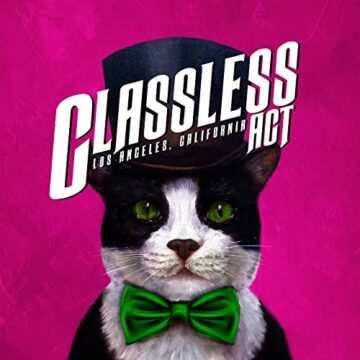 Sleaze Roxx: That is one heck of a lead off single with “Give It To Me”! Can we expect a full album anytime soon?

Griffin Tucker: There will definitely be a full album. I think it might be next year, but there are some more singles coming plus an EP between now and then. it’s gonna rock you to your core!

Sleaze Roxx: Well we’re certainly looking forward to all that! What is the band’s songwriting process? Is there a core few guys who write or is it a group effort?

Griffin Tucker: Since I came into the band kinda late in the game, I was not involved in any of the songwriting on the current tunes, but I do know that everyone in the band contributed to the writing process in some capacity.

Sleaze Roxx: Looks like the band already has a major tour lined up for its debut opening for Mötley Crüe and Def Leppard in 2022?

Griffin Tucker: Yes, that is going to be amazing! I am so ready for that tour to kick off.

Sleaze Roxx: I bet. We know there’s a much larger audience for rock in Europe. Does the band have any plans for touring there?

Griffin Tucker: Europe definitely loves rock ‘n’ roll and we love that! I am sure we will get to Europe as soon as we can.

Sleaze Roxx: What goals do you personally have for Classless Act?

Classless Act‘s “Give It To Me” video (acoustic version):